The Power of “No” in Sales 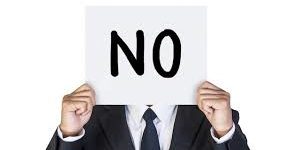 The most powerful word in sales is “no”.  I was reminded of this once again over the past several weeks in various business negotiations.  Let’s start with the fact that the customer is not always right.  In fact, sometimes the customer can be horribly wrong and ask for things that are not in their best interest.  In other instances, the customer may not ask for something that they should and in both cases it’s your responsibility as a professional to educate and enlighten them as to why.

Unfortunately, most sales people have been conditioned to always say “yes” and respond in the affirmative to any customer request or question.  They are afraid to say “no” because they think the customer won’t like a negative response and that it may cost them the deal. The sad irony is that in my experience many more business deals are lost due to not saying “no” versus only saying “yes” to customer questions or requests.

Why is this true?  Well it starts with establishing and maintaining credibility with customers.  Customers don’t believe for a second that your software can do absolutely everything they ask for. Smart buyers will test you by asking for things that they already know your software can’t do to check your integrity. This day and age most buyers have done a ton of background research on you, your company and your products prior to even speaking with a sales rep from your company. They may have some of their facts wrong or may be missing information, but you best assume that they have done a fair amount of research and due diligence on your company and products.

Secondly, customers will often ask for things that are unreasonable or unfair to you and your company. Most of my 25 year business career has been spent working with start-ups selling software and technology solutions to large enterprises (i.e., Fortune 1000 companies). Large companies are notorious for asking the start-ups for free trials or proof of concepts (PoCs). And in negotiations with start-ups, they commonly ask the start-up to take all the risk in the relationship with onerous contract terms. You constantly hear the phrase “we only do deals on our paper” or “just to forewarn you, our procurement/supply chain/onboarding process is rigid and inflexible”. In other words, “we’ll dictate the terms to you if you want to do business with us”.

My long time admonition as a start-up VP of Sales and now Strategic Sales Advisor to start-up CEOs is insist on mutual respect and ask for incremental commitment with the customer. Don’t allow yourself to be dictated to and you’ll quickly find yourself in an untenable subordinate position that is nearly impossible to change once that dynamic has been established in the customer’s mind. One of the best ways to establish respect is to say “no”. In fact, I tend to advocate saying “no” early and often in the sales dialog to establish that all-important respect with the large enterprise customer.

Now, I’m not suggesting that you say “no” for the sake of saying it. Rather, I’m suggesting that there is a right way to say “no” and a wrong way to say “no”. And like most other things, it’s all in the way that you say it, that will determine how it’s eventually received by the customer. For example, whenever I say “no” to the customer, I always explain why I’m saying “no” and provide my underlying business rationale. Secondly, I provide an alternative to what they asked for that is actually better for all parties.

You should never say “no” to a customer in an emotionally charged fashion or in anger. Even if their request is outrageous or insulting. You also have to be careful that you don’t come across as being defensive when you say “no” to a customer. For example, if they ask you if your software can do something that it can’t, simply respond with “no” and then remind them of all the other important things that it can do for them that you have proven.

There’s also a technique of getting to a “no” without even saying the word. An example of this is when a customer asks for a software feature that is trivial and not really relevant to the overall value proposition of your solution. Respond to their question by asking them a question. More specifically, ask them to explain to you why and how is that important to them. Often as the customer is answering you they’ll come to the realization that in the whole scheme of things, that trivial feature they just asked about is not very important to them.

Allow me to share two brief parables with you related to the lessons that I learned over the past two weeks that reminded me of the power of “no”. I was in a business negotiation for providing consulting services to one of my customers. They asked for a proposal and statement of work (SOW) after several scoping discussions. After reviewing the proposal and SOW, they asked me to remove a piece of the consulting work that they intended to do themselves. It would have reduced the amount of the consulting engagement by approximately 50%. But most importantly, that piece of the consulting work is paramount to the success of the project and we have developed a special way of delivering it that really adds huge value and contributes to the success of our overall engagement.

So I pushed back to the customer’s “ask” and shared with them why it was important for us to deliver that piece of the work and the business value to them. I also provided a counter offer to meet them halfway. This initiated a broader discussion about the scope of the project and ultimately resulted in me landing a project that was 50% higher than the original proposal and SOW because we ended up expanding the project, not contracting it. An important thing to note, this was never about the revenue or the size of the deal. Rather it was about doing what was best for my customer and having the conviction to say “no” and push back when I when I knew they were asking for something that wasn’t necessarily in their best interest. It was all about business value.

The next story is that I selectively act as a Strategic Sales Advisor to start-ups that are going to market with their software solutions and selling to the enterprise. For some reason, I’m hopelessly addicted to the challenge of missionary enterprise software sellingJ You’re selling to the largest companies in the world, you don’t have any production customer references yet, and there is a ton of risk for any new customer. What do you have to offer? A strategic vision and early stage software solution that is truly disruptive and a passionate, small team at the start-up that will work tirelessly to turn that vision into product reality. It’s akin to an adrenaline high for a sales professional. …think of it as our form of extreme sports like base-jumping. It is without a doubt the hardest form of sales that exists and yet I love doing it.

So I’ve been helping this cool disruptive start-up bring their software to market. We’ve been in sales discussions with many large F1000 companies. There’s been a lot of interest because the software addresses a vitally important business need for these large enterprise companies and there isn’t anything else out there that does what our solution can do. After getting to the proposal and pricing stage in our Buyer’s Journey with several large prospect accounts, we had a flurry of requests for a free trial or PoC of the software. I had already counseled the CEO of the software company to expect this. We prepared a thoughtful written response to all of these requests and explained why we don’t offer a free trial or PoC. We also countered with an alternative approach that would help mitigate their risk. I’m pleased to say that we’re now in contract negotiations with several of them and expect to get a final approval from one of them this week.

This experience served as another powerful reminder of why saying “no” (in the proper way described above) is so important in sales and in business.